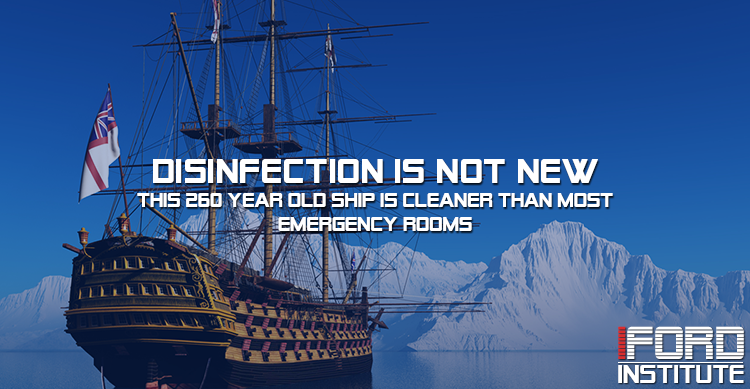 Taking a look at Healthcare History gives us insight into disease prevention engineering, and healthy hospital design. And, as with all historical study, it helps us not to repeat mistakes of the past, and learn how to refine the future.

Would you believe that most modern hospitals’ sanitation methods pale in comparison to the efforts of the British Navy of yore? Seems like a stretch, however, they were relentless in their efforts to maintain the health of their crews. They understood that even a lesser ship could defeat a larger one in battle if the soldiers on board were healthy. Not only that, the British had a substantial economic investment in their Navy. High values were placed on these men, some as young as 12, because of the years and capital invested in training them. Maintaining their health played a crucial factor in their superiority on the high seas.

The British were desperate to prevent the spread of disease during a long voyage because they could not replace soldiers at sea. They were fighting such maladies as scurvy, malaria, yellow fever, plague, and smallpox to name a few. Life at sea was perilous, and these illnesses killed more sailors than numbers lost during battles. You may be surprised to find that despite the lack of contemporary science-based methods, the British knew that Naval ship sanitation prevented their men from getting sick. The crews cleaned and scrubbed the entire ship, every day.

Further, conventional wisdom told them that disease could be spread through the air in cramped below deck spaces. Therefore, they made every effort to bring fresh air into these spaces by continually running hand operated ventilation systems.

Lastly, how the crews dealt with their dead was crucial to preventing disease. The English observed from captured enemy ships, primarily the French, that their lack of cleanliness was apparent, and the stench upon boarding unbearable. While the English buried their dead at sea, the French stored the bodies in the bilge without refrigeration. Therefore, the English surmised that the lack of cleanliness coupled with stale air resulted in sicker crews.

In 1758, a British Admiral team gathered a board of naval officers to formulate the best method of Naval ship sanitation against the spread of disease. Together they devised a standard ship disinfection protocol as follows:
1. Remove all ship ballasts.
2. Scrub the entire vessel.
3. Seal ship and burn sulfur-based gunpowder on board to fumigate the ship.

Consequently, studying healthcare history we learn that compared to their enemies the British ships were the cleanest and most disease free. Moreover, except for the fumigant, this strategy to not too distant from the IFord recommended sanitation process for modern hospitals.